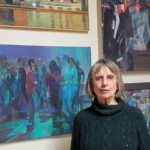 Elinore Schnurr is a contemporary representational painter who uses real scenes to celebrate the complexities of personal interaction in a world of global connectedness and to evoke the desire for transcendence in a secular world.

Schnurr has described her artwork by saying, “My paintings have always been involved with people in urban spaces, but in different ways.  I wander the city sometimes, searching out the scene or event that will capture my imagination with the intent to put it into my own visual language.  When I find something, I try to capture it with a sketch, or by using my camera as a sketchbook, and making a note to return another day with my pocharde box or easel.  Most, but not all of my paintings are of New York City and its incredible diversity.  I have been painting New York City since I arrived from Ohio 50 years ago;  I never run out of inspiration.

During the ‘60s and ‘70s Schnurr’s paintings reflected the threat of physical violence that was directly related to the riots in her Columbia University neighborhood caused by the social unrest instigated by the Vietnam War and the civil rights movement. Newspaper and magazine photographs of these events supplemented her direct experience on the streets. She kept visual notebooks, juxtaposing photographs and thoughts, cramming them together to form new associations. These emerging composites informed the paintings Schnurr was making. These explorations also led her to the countercultures of Zen and Eastern thought as a counterpoise to the violence that seemed to have overtaken society. The solid or hollow, formerly empty figures became transparent; she painted figures that one could walk through: formless form, colorless color; a counter-culture response to the chaos surrounding her.

The World Trade Center Series is based on drawings and crude black and white photographs Schnurr made in the lobby of Tower II between 1984 and 1989. She had discovered that shafts of reflected sunlight cascaded into the lobby in the spring and fall around noontime. The people approaching or leaving the elevators seem to dissolve in the light as it strikes the mirror-like surfaces of the elevator doors and the adjacent walls and/or in the darkness of the elevators in the paintings